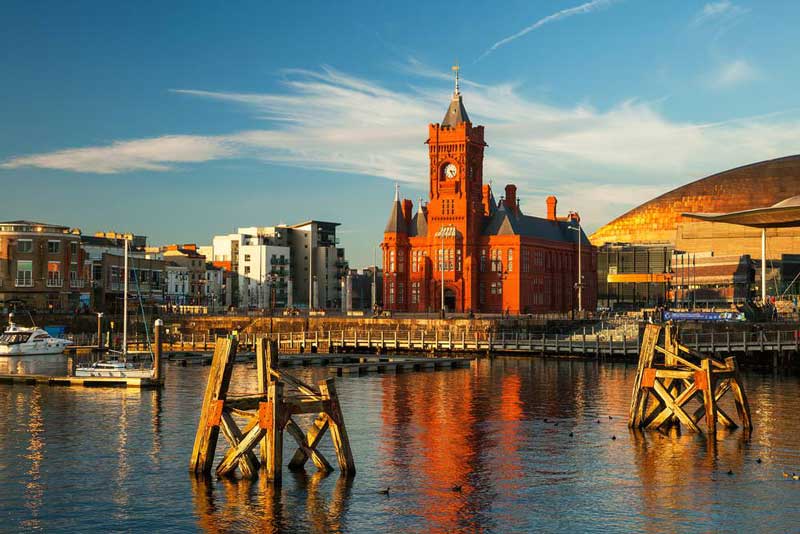 People have lived in Cardiff since prehistory, but the city’s story begins with the Romans, who invaded Britain in AD43. The capital takes its name from the Roman general Aulus Didius – Caer Didi means “Fort of Didius”. The Roman rule ended in the 5th century AD. By the next century, Saxons overrun England. By the year 850, Vikings raided Welsh coast. Within 20 years of the Battle of Hastings in 1066, the Normans were marching on Wales, with William the Conquer himself visiting Cardiff in 1081. In 1091 Robert FitzHamon began work on Cardiff Castle, and a small settlement grew up around it. It was an English town in a hostile Welsh territory. Owain Glyndwr, the great Welsh rebel leader, razed Cardiff in 1404. In 1542 Thomas Capper was burnt at stake in Cardiff for heresy and became the first religious martyr in Wales. By the Elizabethan times, Cardiff was a lawless, pirate-infested port. In 1608 King James I granted a Royal Charter to the town. By the 18th century, it was a sleepy backwater of 1,500 people straggling around the decaying castle.

The Industrial Revolution changed everything. In the 1790s the local gentry, the Butes, built the Glamorganshire Canal to join Cardiff with Merthyr Tydfil, followed by the first Cardiff dock in 1839. They made a rail link between Cardiff and the coal producing areas of Wales between 1845 and 1850. Cardiff became the biggest coal-exporting port in the world. At its peak in 1913, more than 13 million tons of coal left here. Edward VII granted Cardiff city status, and in 1955, it was proclaimed capital of Wales. Today, Cardiff is Europe’s most dynamic capital city, constantly surprising visitors with its grace, space and cosmopolitan buzz. It’s a great place to visit and the ideal base from which to explore the coast, culture and heritage of Wales and western Britain.

The Museum of Welsh Life, which stands on the grounds of St. Fagan’s Castle, is said to be one of Europe’s foremost open-air museums. The Museum shows how the people of Wales lived, worked and spent their leisure time over the last five hundred years. The ground floor of the castle is also open to visitors.

The 100-acre museum now has over thirty original buildings, moved there from various parts of Wales and re-erected to show how the people of Wales lived at different times in history. The buildings include a school, a chapel and a splendid Workmen’s Institute as well as several workshops where craftsmen, such as the blacksmith and the cooper, demonstrate their skills to the public. There are also large indoor galleries displaying exhibitions of costume, daily life and farming implements. Traditional festivals and customs and music and dance events happen throughout the year. Local breeds of livestock are available to be seen in the fields and farmyards, and regular demonstrations of farming tasks take place daily.

It is an all in one museum that shows not only art treasures from Wales’ past but also exhibits displaying the land’s natural history. The archaeology section shows artefacts ranging from mammoth teeth to medieval Celtic coins and cannon balls, as well as exhibits from the Roman and Viking eras. The National Gallery section had an excellent collection of Welsh, English, and European art, including examples of ceramics and porcelain. There is also a good science section, with rock and dinosaur fossil samples on display.

Cardiff Castle, laying in the heart of the town, started during the arrival of the Normans with the construction of the keep. Other medieval fortifications and dwellings get added throughout the subsequent centuries. A succession of noble, English families held it. During the English Civil War of the mid 17th Century, a family in sympathy with Parliament held it, but The crown took it and held for most of the rest of the conflict. The Brute family, in the 19th Century, restored the castle and turned it into a luxurious home fit for a wealthy, noble family, a neo-gothic style dream palace like something out of a fairy tale. In 1947, the castle passed to the Cardiff government and is now run and preserved by the Cardiff Council.

The visitor will be dazzled by the interior of the castle, with its artwork along the themes of astrological symbols, nature’s creatures, the pleasures of the seasons, biblical characters dressed in golden robes, Moorish designs, and heraldic features. Flowing fountains, abundant greenery and incredible marble fireplaces accentuate the astounding effect of the Brutes’ medievalist yearnings.

A great evening excursion held in the undercroft is the traditional Welsh banquet. Excellent mead and wine are served with a conventional four course Welsh feast. Costumed performers sing traditional Welsh ballads to the sound of the harp. One can also take an exclusive evening tour of the castle’s apartments, including three rooms in the famous Clock Tower, before the feast.

Nestled in a grassy hollow near Llandaff Green, the cathedral is on the site of a 6th-century religious community founded by St. Teilo, Bishop of South Wales. Unlike most Welsh churches, Llandaff name is after a saint, rather than the area name. The name translates as “Church on the River Taff.” The cathedral was begun in the 12th century but rebuilt and modified over and over again throughout its history. During a wild, terrible night in January 1941, a massive German mine exploded, destroying much of the cathedral. It was not until the 1960’s that restoration was completed.

The more significant part of the present cathedral, including the nave and chancel arcades, the West front and the chapter house gets completed in 1250. They were quickly followed by the Lady Chapel, which was erected during the bishopric of William de Braose. Llandaff is unique among the cathedrals of Britain as having no transepts A great deal of strengthening and rebuilding then took place in the 14th century which lasted over 300 years.

During the 1960s restoration, George Pace completed the beautiful parabolic concrete arch that so dominates the interior of the cathedral, surmounted by a cylindrical organ case bearing a vast Christ in Majesty worked in raw aluminium, by world-renowned sculptor Jacob Epstein. Behind the high altar, the great Norman arch built by Bishop Urban in 1120 is also dominant. The tomb of St. Teilo gets restored in the 19th century. Of further interest is the Illtyd Chapel, dedicated to the memory of the 53rd Welsh Infantry Division; the Rossetti Triptych, a painting by Murillo Madonna and Child, the Teilo Chapel, the Lady Chapel, and the lovely stained glass windows from some of Britain’s most distinguished post-war craftsmen and artists. Also on display is a relic of the pre-Norman church, a 10th century Celtic Cross that was hidden from Cromwell’s soldiers but rediscovered in 1870 as part of a wall and now situated in the south aisle. In 1992 a new peal of thirteen bells was placed in the northwest tower with each bell named after a Celtic saint.

The airport is about twelve miles from the city centre and with flights from other cities within the UK, and Europe can take you. There are excellent train connections from such places as London. Both the regional and local bus lines use the central bus station.