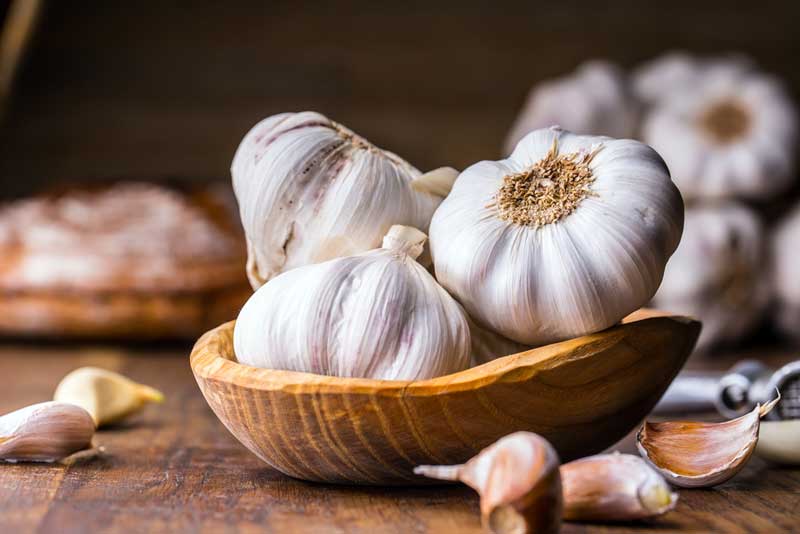 For the last 4000 years of human history, Garlic, also known as Allium sativum, has been both cherished and reviled, both sought for its healing powers and shunned for its pungent after effects. From miracle drug to vampire repellent to offering for the gods, this unassuming plant has had an undeniably important place in many aspects of human history, and today enjoys a renewed surge in popularity as modern medicine unearths the wonders of this ancient superfood.

Unlike that mysterious Tupperware lurking at the back of your fridge, people employ garlic in a variety of functions for millennia. Archaeologists have discovered clay sculptures of garlic bulbs and paintings of garlic dating about 3200 B.C. in Egyptian tombs in El Mahasna. A recently discovered Egyptian papyrus dating from 1,500 B.C. recommends garlic as a cure-all for over 22 common ailments, including lack of stamina, heart disease and tumours, and the Egyptians fed garlic to the slaves building the pyramids to increase their strength. Garlic proved itself worthy to peasant and royalty alike as Tutankhamen (Egypt’s youngest pharaoh) was sent into the afterlife with garlic at his side.

In ancient Greece and Rome, garlic enjoyed a variety of uses, from repelling scorpions to treating dog bites and bladder infections to curing leprosy and asthma. It was even left out as an offering to the Greek goddess Hectate. Early Greek military leaders fed garlic to their troops before battles to give them courage and promise victory (and perhaps in an attempt to fell the opposing army with one good whiff.) Even Greek Olympic athletes counted on garlic to stimulate performance. Ancient Transylvania, home of the vampire legend, found garlic to be an effective mosquito repellent as well as a way to ward off toothsome visitors. In the Middle Ages, garlic was thought to combat the plague and was hung in braided strands across the entrances of houses to prevent evil spirits from entering. While modern-day experience cannot confirm garlic’s effect on evil spirits, but garlic, at the least, will avoid a goodnight kiss at the end of a date.

For many years, garlic was shunned by Western cultures such as Britain and America because of the residual stench it left behind. In the seventeenth century England, garlic was considered unfit for ladies and anyone who wished to court them, and it was avoided in America even early into the 20th century when famous chefs would substitute onion for it in recipes. As America experienced a massive influx of immigrants during the 19th century, however, garlic slowly gained a foothold in the American palette.

The Science of Garlic

Beyond superstition, modern research has confirmed what our ancestors believed about the health benefits of garlic. In 1858, Louis Pasteur documented that garlic kills bacteria, with one millimetre or raw garlic juice proving as useful as 60 milligrams of penicillin. During World War II, when penicillin and sulfa drugs were scarce, the British and Russian armies used diluted garlic solutions as an antiseptic to disinfect open wounds and prevent gangrene. Though not completely understood at the time, today’s research has confirmed that garlic’s healing powers stem from hundreds of volatile sulfur compounds found in the vegetable, including allicin, (which gives garlic its offensive odour), alliin, cycroalliin, and diallyldisulphide.

The allicin in raw, crushed garlic has been shown to kill 23 types of bacteria, including salmonella and staphylococcus. Heated garlic gives off another compound, diallyldisulphide-oxide, which has been shown to lower serum cholesterol by preventing clotting in the arteries.

Vitamins in garlic, such as A, B, and C, stimulate the body to fight carcinogens and get rid of toxins, and may even aid in preventing certain types of cancer, such as stomach cancer. Garlic’s sulfur compounds can regulate blood sugar metabolism, stimulate and detoxify the liver, and stimulate the blood circulation and the nervous system.

In many cultures, garlic is also considered a powerful aphrodisiac and a vegetarian alternative to Viagra. Some say it’s even able to raise a man’s sperm count. In Palestinian tradition, a groom who wears a clove of garlic in his buttonhole is guaranteed a happy wedding night.

While experts vary in opinion regarding the recommended daily amount of dietary garlic, most of them agree that fresh garlic is better than supplements. To negate the aromatic after effects of fresh garlic, herbalists recommend munching on fresh parsley (it’s more than just a garnish, folks) or fennel seed.

Public awareness about the health benefits of garlic has slowly but dramatically increased in America, aided by several landmark studies and a $176,000 grant from the FDA a few years ago. Now, garlic supplements abound, and Americans are clamouring for more of the bulbous vegetable, which complements other recently recognised “superfoods,” such as olive oil and tomato sauce, so well.

Growing your garlic at home can be fun and relatively easy, even for those without a green thumb. Garlic grows from the individual cloves, with each clove producing one plant with a single bulb, which may, in turn, contain up to twenty cloves. Because of this, garlic is self-sustaining. Garlic’s unique fungicidal and pesticide properties can also help keep neighbouring plants healthy.

Garlic typically enjoys a Mediterranean climate but can be grown in colder climates as well. Choose a garden site where the soil is not too damp, and sunshine is abundant. Plant the cloves individually, standing upright and about an inch under the surface. Cloves should be planted about 4 inches apart, with rows about 18 inches apart. The best time to plant garlic in the USA or Europe is early spring or late fall/early winter. Although knowing when to pick garlic isn’t an exact science, a good rule of thumb is to harvest your garlic when half of the leaves around the base of the bulb are green, and the other half are turning brown and dying off. Take your garlic inside right away, brush off any dirt, and store in a cool, dry place.

Although sometimes misrepresented, garlic has had a fantastic array of nutritional and medicinal applications throughout human history, and it’s still improving the health of many today. So grab a clove and enjoy the many benefits of nature’s oldest superfood: garlic.